On May 16th, 2014 a speech was given by Navy SEAL Admiral William H. McRaven on his 10 life lessons that could help change the world. He talked about how the average American meets 10,000 people in their life time and if we only change the lives of 10, we could eventually change the world forever. This concept is something that resonates with me. I had the pleasure of witnessing lives being changed first hand on Memorial Day 2018 at Compound Crossfit. 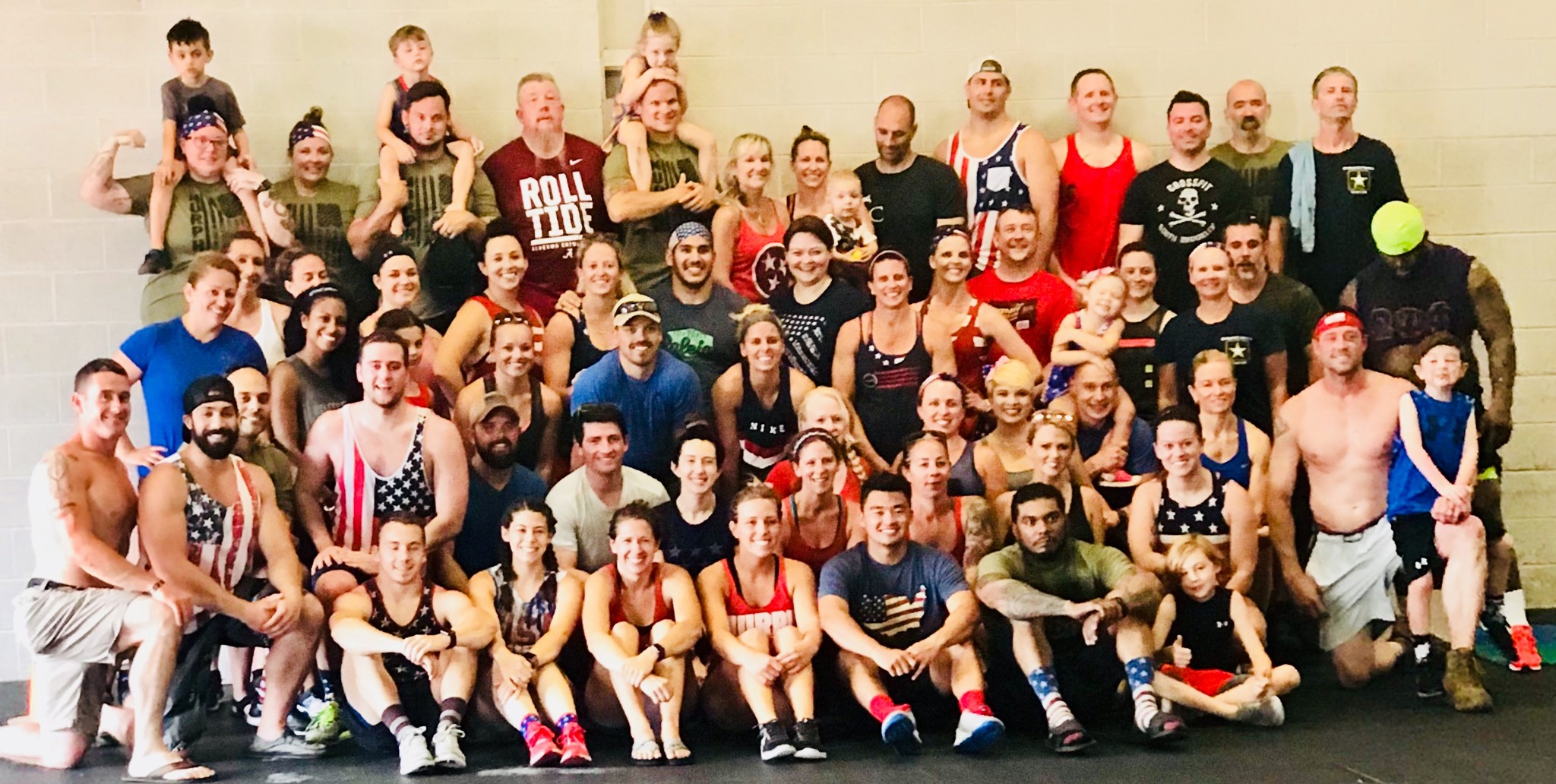 CROSSFIT CAN CHANGE THE WORLD:
COMPOUND IS ALREADY DOING IT

On May 16th, 2014 a speech was given by Navy SEAL Admiral William H. McRaven on his 10 life lessons that could help change the world. He talked about how the average American meets 10,000 people in their life time and if we only change the lives of 10, we could eventually change the world forever. This concept is something that resonates with me. I had the pleasure of witnessing lives being changed first hand on Memorial Day 2018 at Compound Crossfit.

“I can assure you that it matters not whether you ever served a day in uniform. It matters not your gender, your ethnic or religious background, your orientation or your social status.“
-Navy SEAL, Admiral William H. McRaven 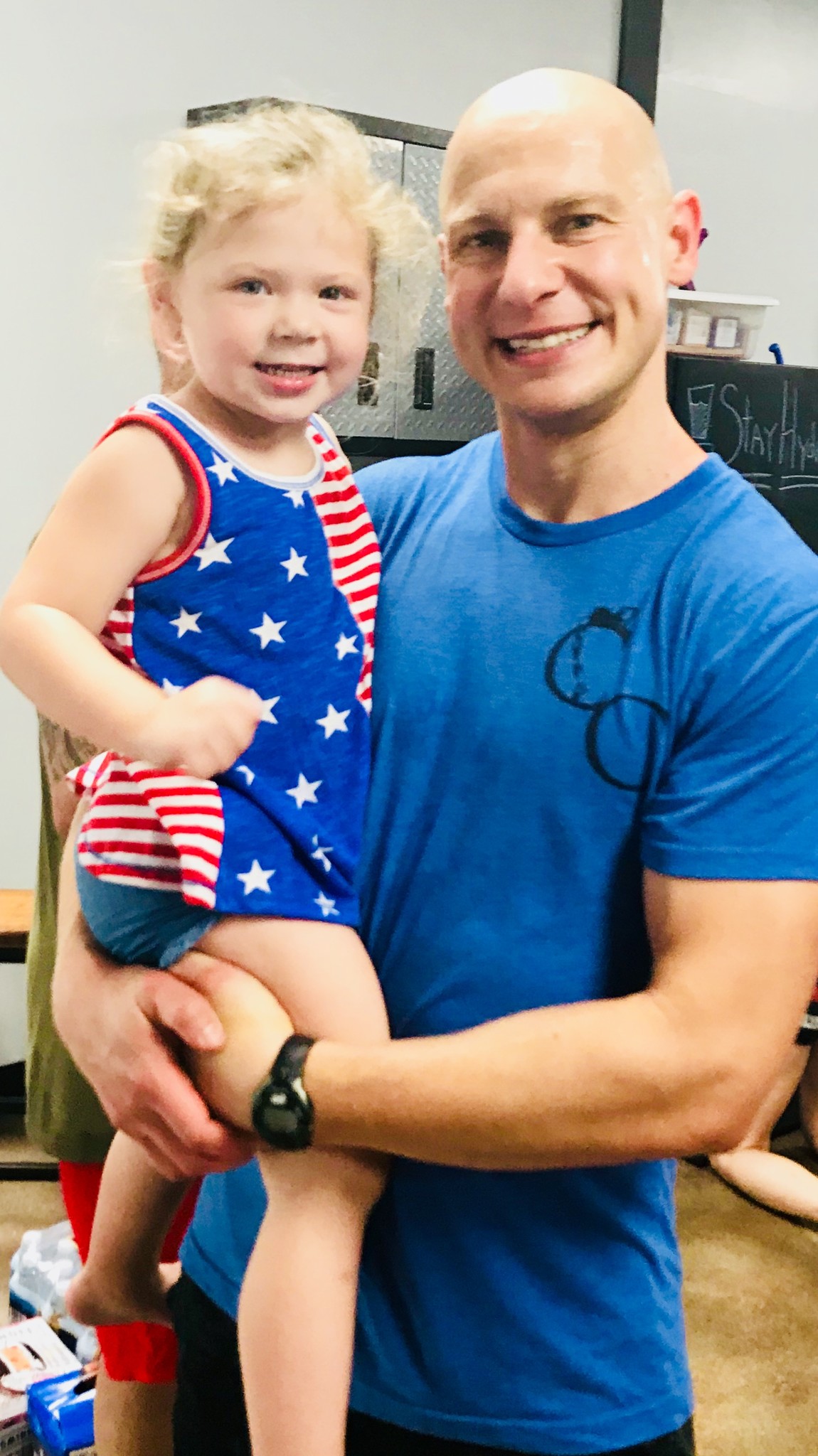 The event had come to an end and all but a handful slowly shuffled towards the door in exhaustion saying goodbye with dignity from accomplishing Murph. I stood in the deafeningly silent front room of the gym sorting through my thoughts and recalling my interactions with the members, family and visitors. My perspective on Murph was different now but I wasn’t sure why yet. As I stood there in a daze, I hear Ryan (the co-owner) ask anyone who would listen, which was all of five people, “we should donate these right?” No one really answered, there was just kind of babbling back at him to include myself. I look up and he has bags of unopened hamburger buns. He asked again but it was the same responses. He was primarily concerned with how to donate the extra food and drinks from the day’s event. Ryan, along with the giggly Tara (also CO-owner) chatting with the two remaining ladies have no real idea they have changed the lives of well over the 10 people Admiral McRaven talked about. Instead, he was selflessly wanting to donate hamburger buns.

Just two hours prior there were people everywhere buzzing around the room. They were primarily dressed in red white and blue looking like zombies from the heat and pushing themselves harder than every before. Some knew each other and some didn’t but that wasn’t a vibe anyone would pick up on. Everyone was there with the same heavy heart, paying respects and appreciating their freedom. 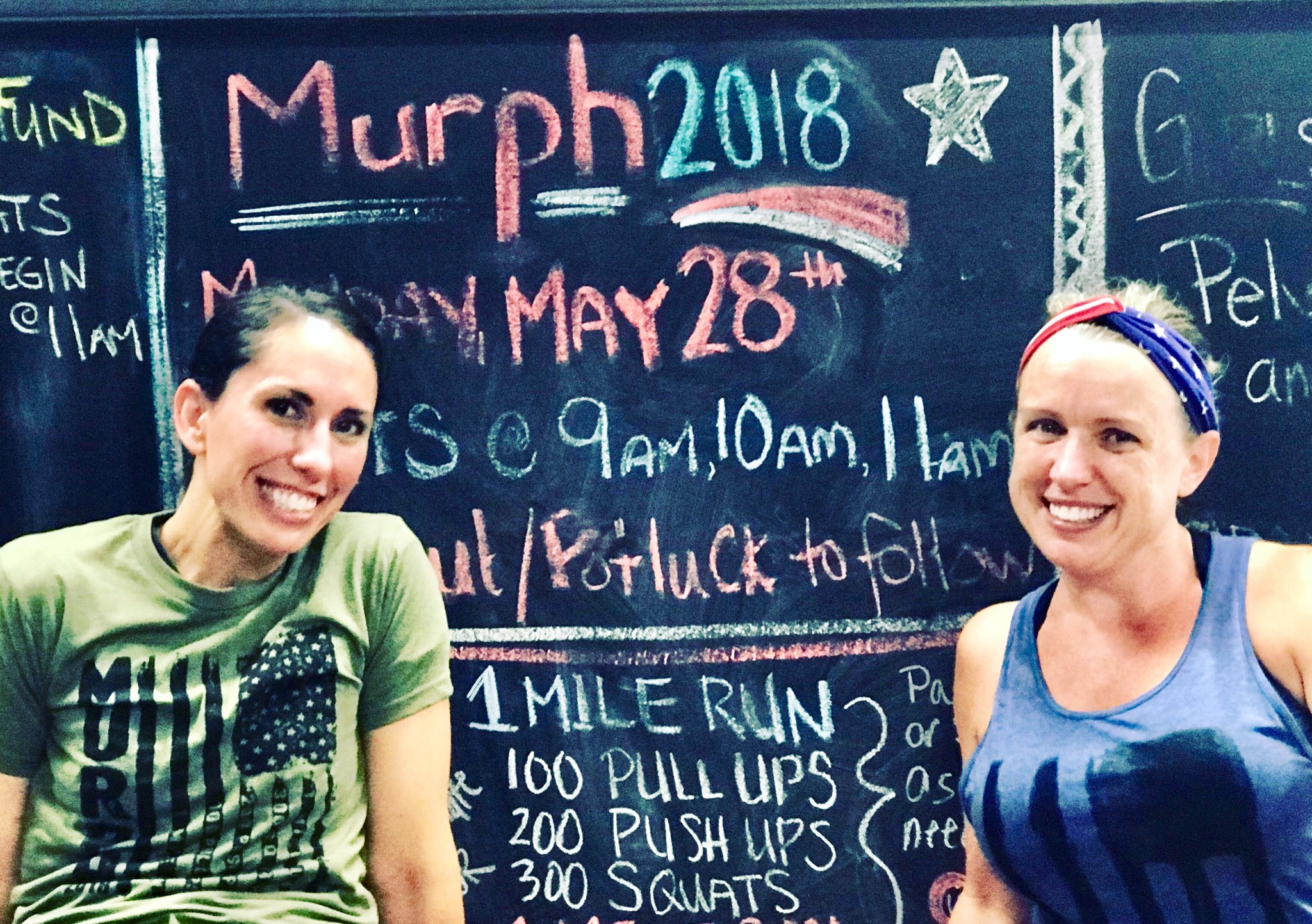 As I made my way through the people and asking questions as usual they made sure I knew about Ryan, Tara and Melissa (Chalk Girl). Ryan was named a role model, Tara always ready with a warm heart and Melissa would be standing by to make sure no one gave up on themselves. There were many mentions of the staff and atmosphere as well. This further reinforced what I already knew, which is this gym is changing the world.

I’m hoping in my upcoming adventures that I continue to find the same theme of community, health and mutual respect for one another to reach a common goal. It is always nice to see our freedom being put to good use on such a momentous occasion. I can only further hope they eventually band together as businesses and affiliates.

I can’t help but think of Endurance Apparel and Gear when speaking of community and support no matter who you are. A well deserved shout out to Malissa, the owner of such a wonder place. Everyone asks me how I met Malissa and fell into working for her. She gave me her shoes. I’m not kidding either, she gave me her personal shoes to use. She cares so much about people, health and happiness she is willing to give up her own shoes. I wish I could say that I am special, but I am not. Many people will tell you the same stories about Malissa literally taking the shirt off of her own back just to put a smile on someone’s face. Whatever your style of fitness, she knows that it does not begin or end just in gym but beyond and we need the right gear for that to happen. She supports local and small business and finds the best places who care about people not just money. Greg Glassman said, “his ability to avoid greed is what has made Crossfit successful.” Thank you Malissa for also using your freedom to show both men and women that if you have a dream in this country and you believe in yourself you can be successful.

FOUR TAKE AWAYS FROM FOUR AMERICANS(definitely not the only things from the day though)
1. Worry about donating hamburger buns more rather than being selfish.
2. Laugh more and have an open warm heart for anyone rather than forming cliques.
3. When someone gives up on themselves you should never give up with them.
4. Give up your shoes or maybe just share remember not everyone is as fortunate as you may be.

ARE YOU READY TO CHANGE THE WORLD? 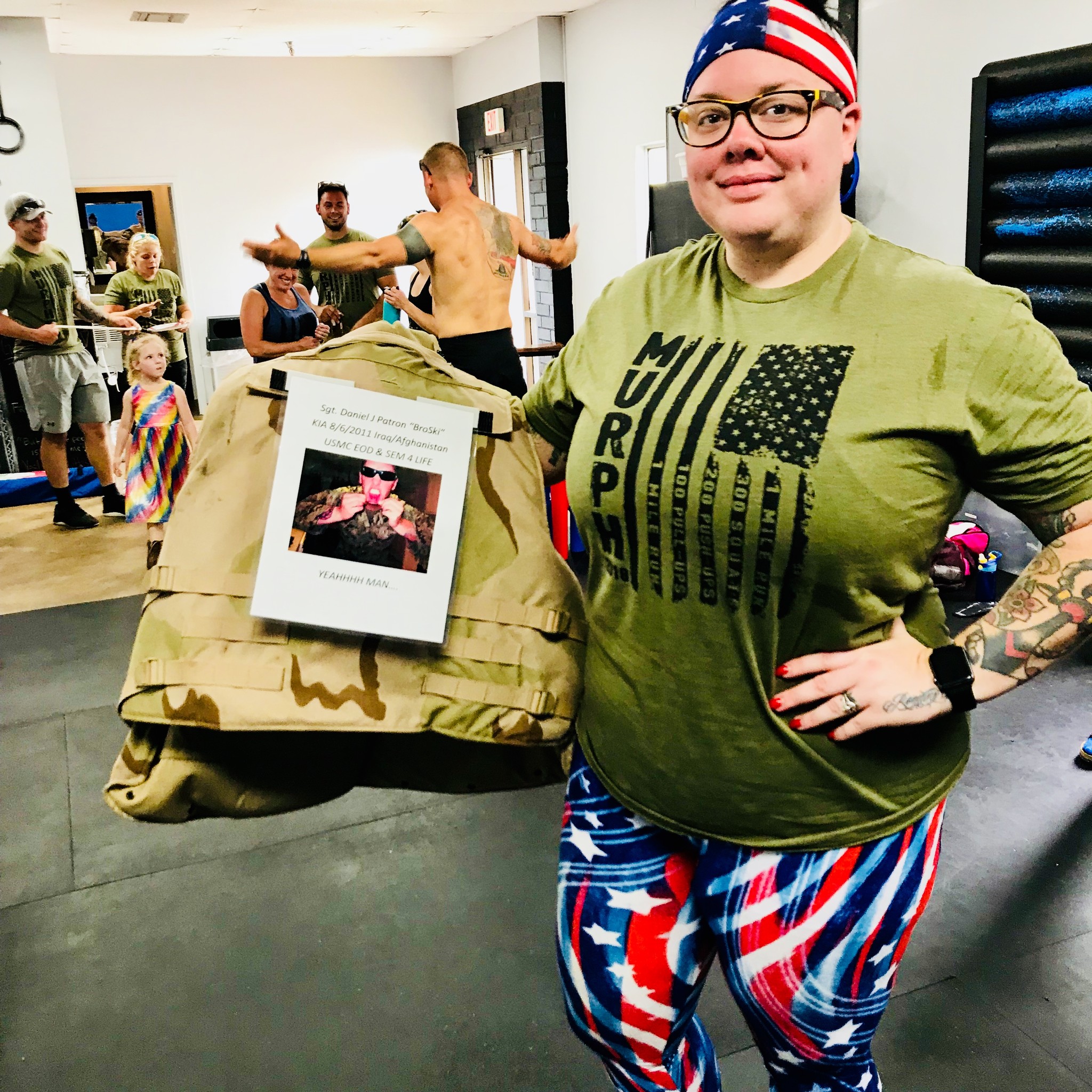 In Loving Memory of Sgt. Daniel James Patron, USMC EOD tech.
Sgt. Patron was killed in action on August 6, 2011 while disarming an IED. Survived by his wife Cody Patron, he remains peacefully in Perry, Ohio.

Amber Bartlow (above) is his sister. This is her first year doing Murph and continues to keep his spirit alive. I had the honor and pleasure of talking with Amber about life and happiness. My immediate impression of her is she is bubbly, fun and spunky but she said she only recently after being apart of the Compound family has found that part of herself again. We did find moments where eyes welled up with tears but ultimately she was grateful to be able to smile while keeping his memory alive. Sgt. Patron’s brother Matt Patron who has created a film titled, “Collecting Sgt. Dan.” I encourage everyone to check it out. Here’s to you Sgt. Patron, may you Rest In Peace.

In Loving Memory of SFC Marshall E. Robertson, US Army 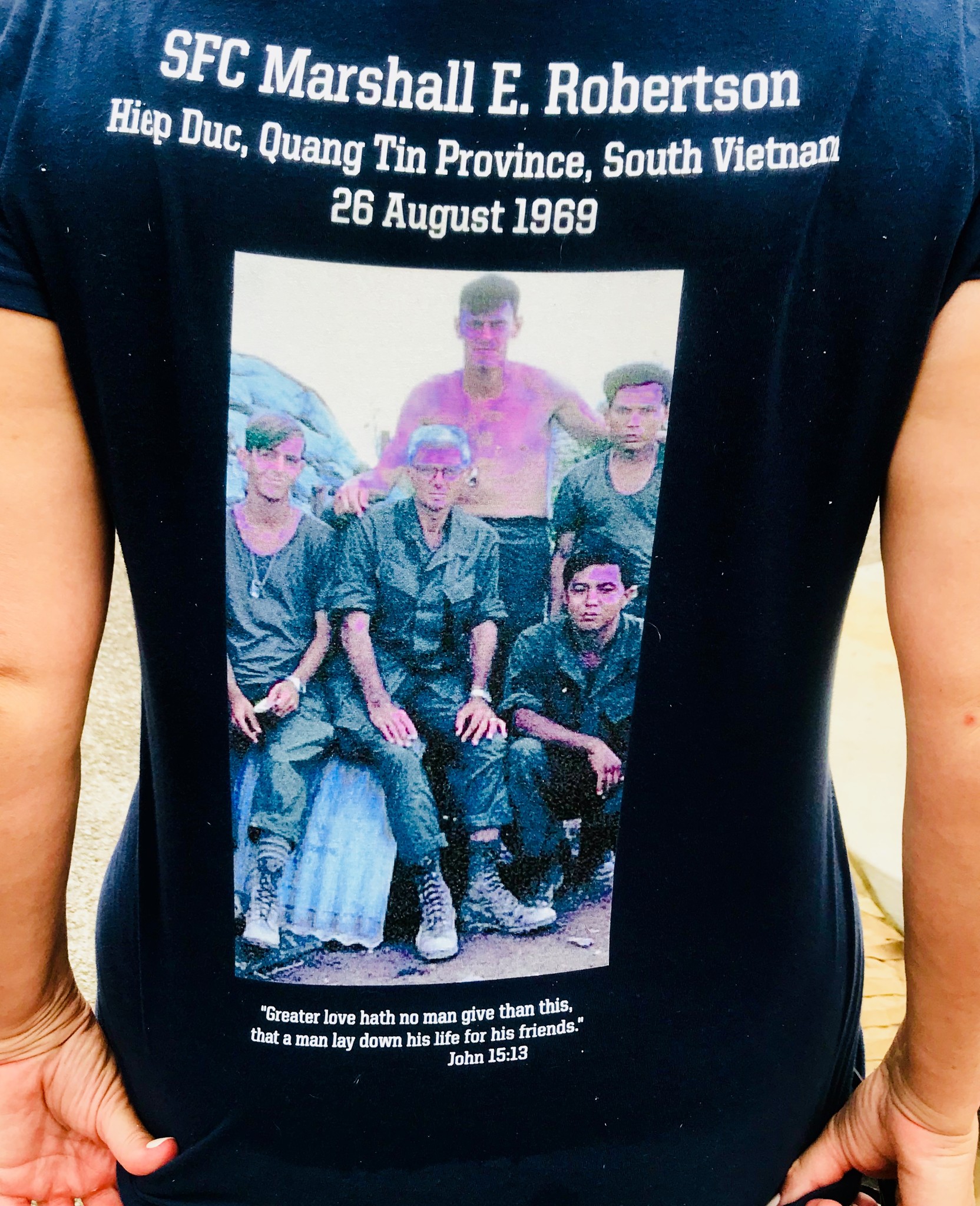 His wonderful daughter and son-in-law (above) keep his memory alive and join the Compound family reminiscing and honorably telling his heroic story. Rest easy my friend.
Noah with his new Compound friends!

He’s our new gear guru!!
Stop in and chat if you’re looking for something in particular! 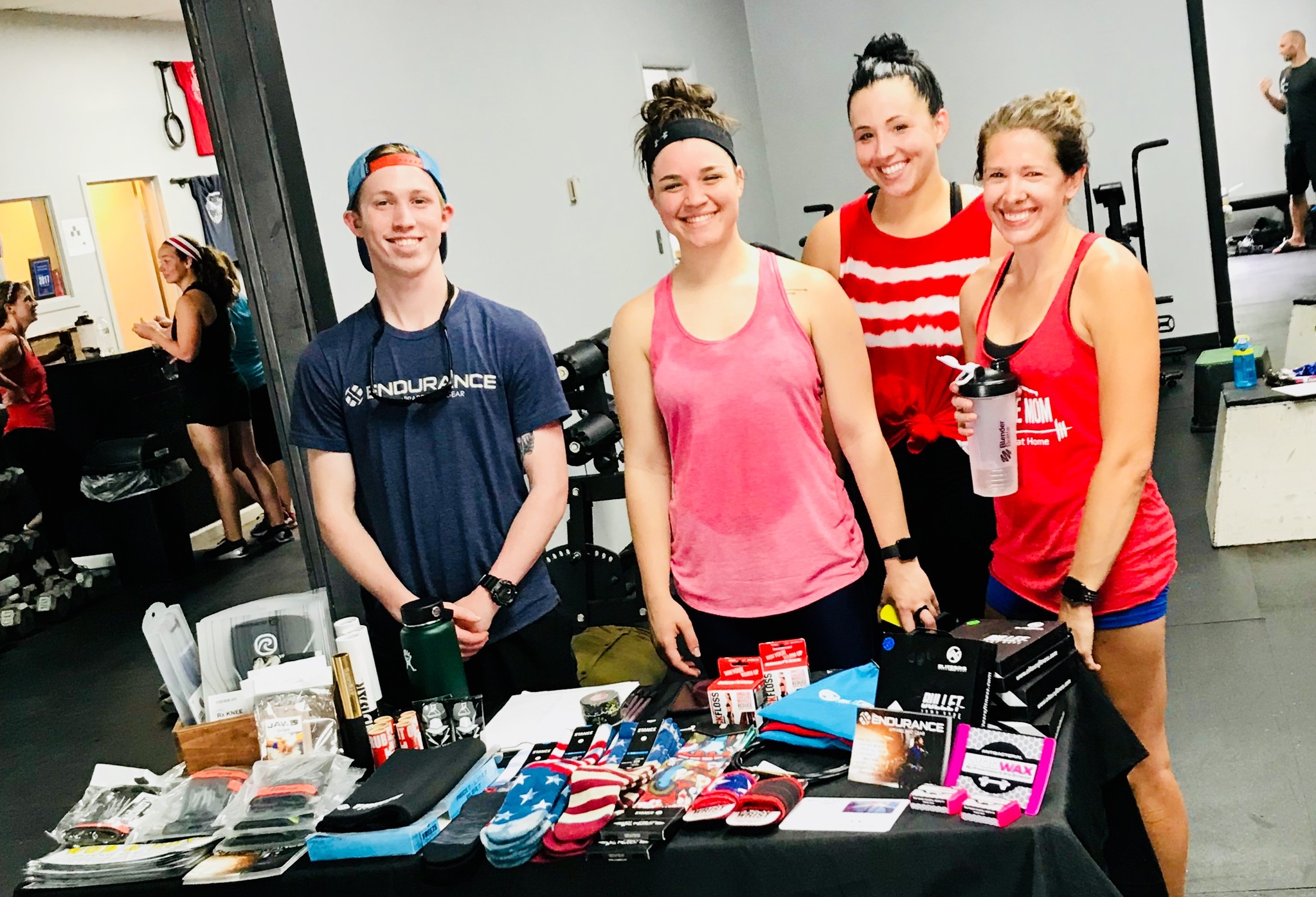 Way to rock the Stars and Stripes in style!! There is nothing better than a high school glam pic while getting a solid hug from your bro (left)!! Hat’s off to Captain America (Right) Looking good guys!! 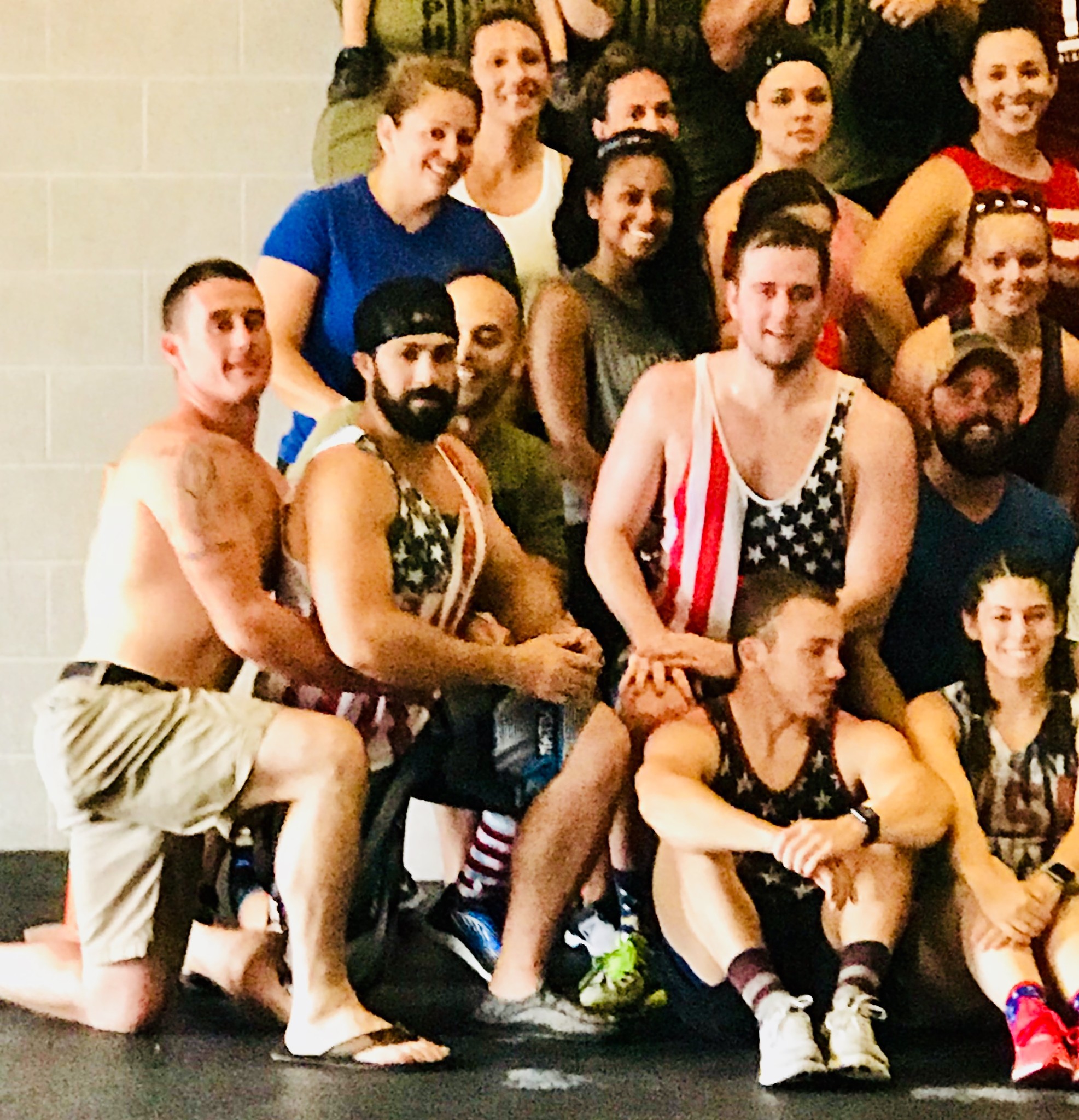 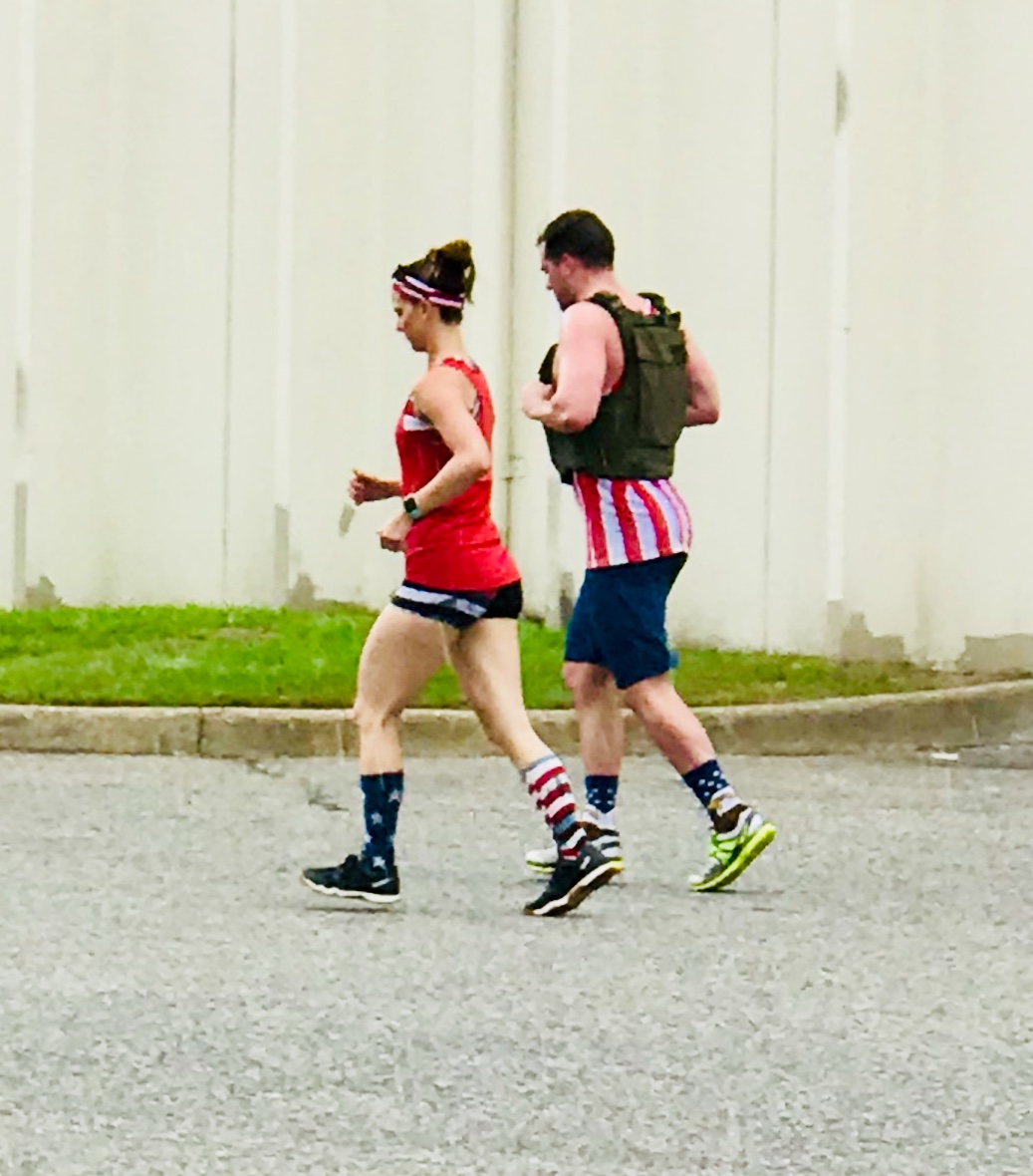 The finish line of Murph and it looks like relaxing is on the horizon! Melissa (right) running with one of the Compound family members. She encouraged him to not give up. She had already done a full Murph and ran with multiple people. You’re amazing Melissa!! (Not to be mistaken for Malissa the owner of Endurance. Two different people, two different spellings). 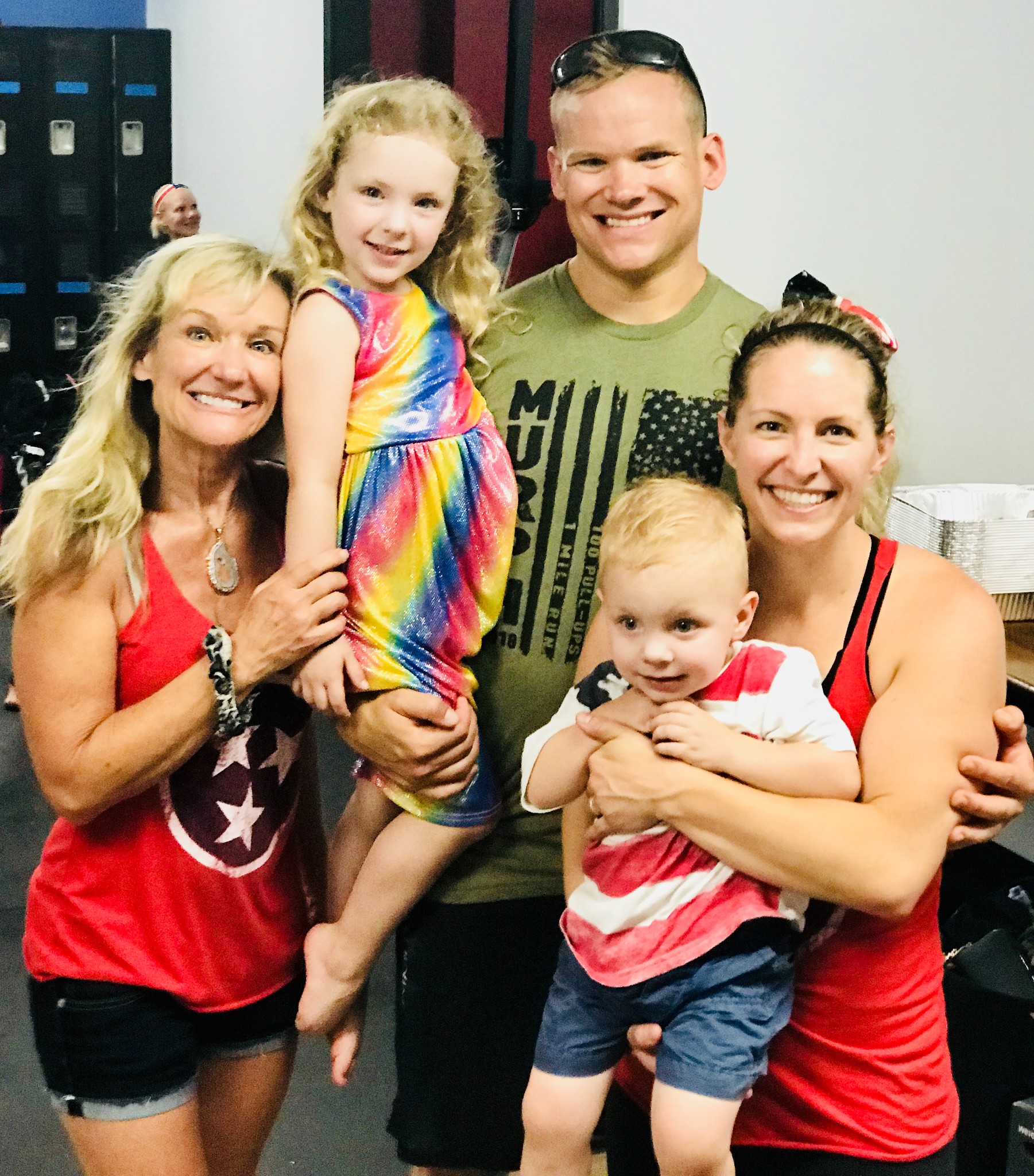 Chris Wissing is our active duty Navy guy who lives life on the edge. Let’s just say he’s jumped out of a perfectly good helicopter a time or two. Joined by his beautiful wife Lauren a local government HR director and his Veteran mother Lana. Let’s not forget about those awesome kids striking a pose. Camera ready always! It took a while for Chris to pick his mantra but he nailed it with, “there’s no secret, just hard work.” Lauren lives life by remembering, “if you think you can’t...you are.” Chris and his family want everyone to enjoy the bbq, beer and fun but don’t forget to remember why you’re able to take those moments of freedom to reflect. Your love for Compound definitely shines through. Heck your love all around is amazing!!

In Loving Memory of Michael Patrick “Murph” Murphy, US Navy SEAL Officer who died June 28, 2005 in Kunar Province, Afghanistan defending our freedom and democracy around the world. Thank you for continuing to CHANGE THE WORLD.

One behalf of Endurance Apparel and Gear thank you Compound for opening your doors to us. Cheers! -By Liz Bates, Public Relations Intern (Whoop Whoop!!)